A major change is coming that will have a profound and wonderful impact on me as innkeeper. My husband, Jim, is moving to Maine in May to co-innkeep with me. No longer will I be running the inn as a solo venture.

Jim has been holding down the fort in Pennsylvania, where we lived all of our lives prior to moving to Maine. He left the book selling world 16 years ago to start and run his own company, A. Quartersawn Furniture Restoration. During the past year and a half, he has been finishing up with a long list of customers while planning and implementing an exit strategy. He’s also been a local resource for our son, Mark, who is attending Temple University’s College of the Arts in Philadelphia.

Jim brings with him a welcome and essential skill set. He is a great repair person and bookkeeper, which are two jobs I will gladly hand over! He will also serve as the resident librarian and champion of our music area, in addition to helping me with general inn operations. Some of you may have already met Jim. He has come for several “vacations” wherein he accomplished a very long “honey do” list.

Jim is an enthusiastic reader (mostly nonfiction). He’s also a cinephile, especially when it comes to art films and independent movies. He would win at Trivial Pursuit if there was a music category- he’s into rock, folk, rock-a-billy, jazz, blues and the works of singer-songwriters. He also plays guitar-”somewhat,” he says. 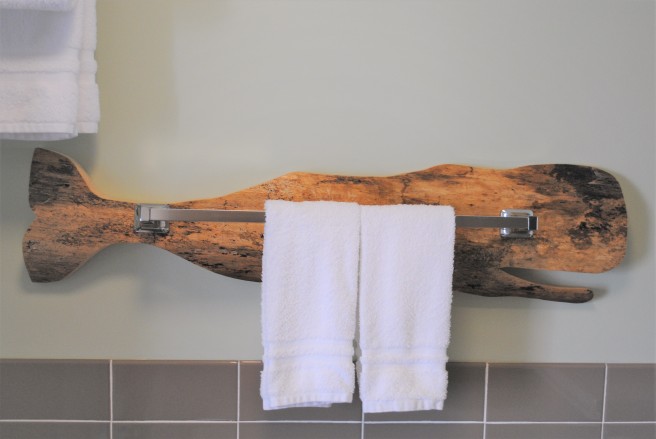 Jim will also take on the role of Lubec’s resident whale-maker, creating the rustic, wooden whales that you will find at the inn and all around Lubec. Ernie “Whaleman” Williams, our friend whose whales have graced businesses and homes near and far for decades, has passed his whale-making torch and all of his trade secrets to Jim.

It looks like Jim will have many torches to carry! We have wanted to work together for years, and now it is finally happening. We make a great team. Welcome, Jim! It’s been too long! It will be good to be two again soon. I’ve missed you!